Swing for the fences! 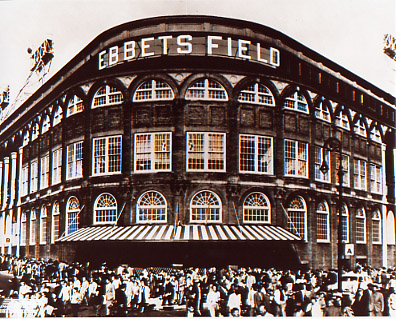 My dad grew up in New York City.  He lived in Queens but attended Brooklyn Tech.  He later attended Columbia College and Columbia Medical School.

My dad was a Brooklyn Dodgers fan, and went to quite a few games at Ebbets Field.  My dad and my mum moved to L.A. at about the same time as the Dodgers did.  We went to lots of Dodger games at Chavez Ravine.  While I enjoyed watching baseball, I was a very marginal baseball player.  In Little League I was generally put in the outfield where it was assumed, quite rightly, that I could do less damage.  I don’t think my batting average was ever north of the Mendoza line.

The other day I was wandering around the Pioneer Square area in Seattle and I saw a storefront with a sign reading “Ebbets Field Flannels.”  I was intrigued and walked in the store.  It was full of baseball jerseys but there wasn’t a Mariners or Dodgers  jersey in sight.  Instead there were jerseys of the Green Bay Jays, the Ethiopian Clowns and the Lancaster Red Roses.  And the jerseys weren’t made out of polyester, they were made out of wool flannel.  I also found baseball caps with insignias I had never seen before.  I asked to speak with the owner and he soon appeared.

Jerry Cohen founded Ebbets Field Flannels in 1988.  Jerry had grown up wearing flannel baseball jerseys and he wanted to wear some them again while playing in his band.  But no one was making them anymore.  So Jerry bought some original wool flannel fabric and decided to make them himself.  Thus was Ebbetts Field Flannels born.  Jerry features 450 historical baseball jerseys from the Federal League, the Negro League and the Pacific Coast League and other leagues as well.  Ebbetts Field Flannels jerseys are made to order, though there are lots of jerseys at the store in Seattle.  A few of my favorite Ebbets Field Flannels jerseys are the 1953 Hiroshima Carp jersey, the 1905 Leland Giants jersey, and the 1957 Portland Beavers jersey.

Aside from jerseys, Ebbets Field Flannels also makes authentic wool ballcaps, and football jerseys like this one identical to the one worn by the 1948 Brooklyn Dodgers Football team.

But the jersey I want is made by the members of our extended American family who work at Ebbets Field Flannels but it isn’t an American jersey at all.  It used to be worn by America’s most bitter rivals, the Soviets.  What I am asking for Christmas this year, a holiday that the Soviets probably tried to ban, is the Ebbets Field Flannels’ 1972 Soviet Union Olympic Hockey Jersey in “glorious Socialist red.”  Man, what a cool jersey!

Whether you want authentic vintage American baseball jerseys and caps or Soviet Hockey jerseys, the only place to go is Ebbets Field Flannels.

I live in Seattle and love telling stories about Americans, the places where they work and the things that they make. I have just published a book, Simply American, encouraging Americans to purchase American made products; the book can be ordered at www.simply-american.com.
View all posts by Simply American LLC →
This entry was posted in american made, Apparel, Made in America, made in usa, Seattle and tagged Ebbets Field Flannels, hockey jerseys, Los Angeles Dodgers, Made in America, made in america products, Made in the USA, Made in the USA products, negro league, throwback baseball jerseys. Bookmark the permalink.

2 Responses to Swing for the fences!